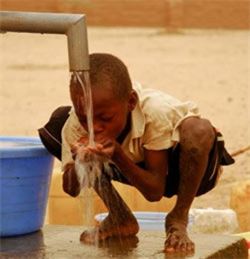 Safe Water for Sierra Leone is a faith-based humanitarian organization which was founded for the purpose of providing safe drinking water to the communities affected by the 2012 cholera outbreak and 2014 Ebola Virus Disease crisis in Sierra Leone, West Africa.

We put our focus on cholera and EVD (Ebola Virus Disease) for both have taken so many lives especially in the Sierra Leone area over a period of few years. Cholera is a diarrheal disease that has a substantial impact on public health. Each year, it affects the lives of millions of people worldwide and contributes to the deaths of tens of thousands. In 2012 alone, a deadly Cholera outbreak in Sierra Leone left over 270 deaths and more than 19,000 affected as a result of water-related diseases (WHO). Many of these are individuals who do not have access to safe drinking water in their communities.

On the other hand, the recent outbreak of the Ebola Virus Disease (EVD) and the poverty-stricken state of these areas has made most of the rural communities vulnerable to infectious diseases, occasioned by the unsafe drinking of water and poor sanitation. The Ebola epidemic killed more than 11,000 people and made more than 28,000 sick in West Africa between 2014 and 2016.

We saw the high need for easily accessible and safe drinking water to combat these deadly diseases and to bring relief to individuals and families. Safe Water for Sierra Leone presently works in 25 communities which were highly affected by outbreaks. We serve everyone regardless of religion, race, ethnicity, and gender.

Being a non-profit organization, we are operating with the generous support of our sponsors, donors, and volunteers. If this program has stirred your interest, and you are contemplating on being a part of or supporting us, you may call us at +1-915-262-6502 for our USA office or at +232-99-661-223 for our West Africa office. You may also email us at info@safewatersl.org.